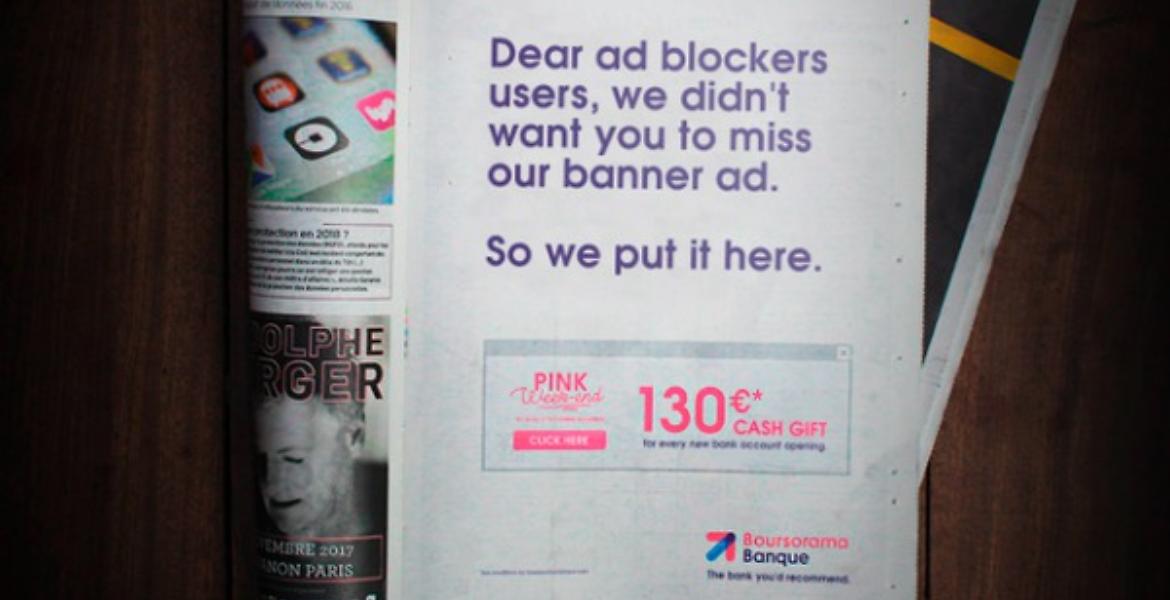 At first, all we had was print advertising, you know, like in newspapers and magazines, etc. Then the digital revolution started, slowly at first, on the Internet only, then grew faster and faster and started to embrace mobile devices. Pretty soon, advertising was everywhere. As many consumers saw this as an intrusion, enterprising developers came out with Ad Blocking software. Pretty soon, ad blockers were everywhere, really messing with advertiser’s plans and campaigns.

So what is an advertiser to do? Ignore these apps and continue to create advertising for these digital platforms? Even if many of their targeted audiences are never even seeing them those carefully crafted creative messages?

It turns out that some European bank came up with a novel approach to circumvent this. The Boursorama Bank has been running print ads in French newspapers that targets users of Ad Block software. Yes, you read that correct. This bank has defined ad block users as a new audience and ran an ad that said “Dear ad blockers users, we didn’t want you to miss our banner ad. So we put it here”. Then printed their online banner below that. The banner even shows a button that reads “Click Here” (the bank is an online-only bank).

This of course raises a point for debate – is this a creative approach or just a dumb idea? It is certainly a novel idea and likely to be the first campaign of its kind. Has ad blocking become so pervasive that advertisers are considering going back to its print origins? come full circle? You be the judge, but the fact is, this a great example of a brand that will go to any length to reach its customers, even if the brand only offers online services.

Who would have guessed that ad blocking software could become a source of revenue for print ads?